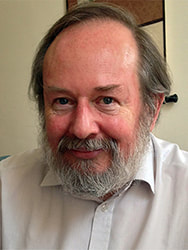 Prof. Tim Barrett
On March 1, 2018, BBC Radio's "In Our Time" aired an episode discussing Sun Tzu's Art of War for 43 minutes. We relished every minute of that program and thought it ended too soon. All the invited guests were supremely knowledgeable in Sun Tzu, his time and environment, and of course, his Art of War.

When the question came to The Art of War spreading outside of China and into Japan, one particular guest, Dr. Tim Barrett, Emeritus Professor at SOAS University of London (School of Oriental and African Studies), caught our attention. He eagerly mentioned Takeda Shingen and Akira Kurosawa's film Kagemusha. This was music to our ears.

If you're a long-time reader of Sonshi.com, you would know our deep interest in the Japanese samurai who revered Sonshi (Sun Tzu) and his Heiho (Art of War). When Dr. Barrett went on to articulately recite the furinkazan -- a banner connoting "strike like the wind, tranquil as the forest, devastating as fire, firm as the mountain" used by Shingen modeled directly from Sun Tzu's Art of War -- we fell off our seats.

We decided right then and there to invite the good professor to Sonshi.com for an interview and he graciously accepted our invitation to join us here. Dr. Barrett is particularly interested in the history of East Asia's religious traditions, but a recent request about religion and violence had him write and discuss about military matters and thought in East Asia as well.

Below is our interview with Dr. Tim Barrett. Enjoy!
Sonshi: How did you first learn about Sun Tzu and his Art of War book? What were your initial thoughts at the time and what do you think about the book now?

Barrett: I cannot remember my first encounter with Sun Tzu, since I have been gradually learning about Chinese thought for over half a century.  I do recall in the 1980s studying a story about Sun Pin in the Taoist Canon in relation to the White Ape as a martial arts figure, but for a long time - like others back then - I suspected that Sun Tzu was a figure invented by Sun Pin.  But then I listened to a lecture by Mark Lewis in which he pointed out the new evidence that made this hypothesis unlikely and suggested that Sun Tzu was actually quite early in the Warring States period.  Roger Ames was also in the audience and agreed with this.  I remember this came as a revelation.


Sonshi: Do you agree with the notion that Sun Tzu was an individual influenced by Taoist principles? For example, does Sun Tzu approach warfare with the mindset that "one without an enemy will be victorious"?

Barrett: I know that many scholars see Taoist elements in Sun Tzu, and certainly the general in his thinking must be imperturbable.  But most Taoists (among others) wanted to be sages; Sun Tzu wants to win.


Sonshi: At least for the last dozen years, China's top leaders have gifted Sun Tzu's Art of War to other world leaders as a representative text of Chinese culture. What do you think is the intention of doing so?

Barrett: Sun Tzu is not the only text that has been used as a gift - in the 1970s an edition of the Ch'u Tz'u (Songs of the South in the David Hawkes translation) was given to Japan.  But it does represent an element in Chinese civilization without a precise counterpart in European history, in that Western books on generalship have not had the same cultural influence, and works like the Iliad or the Anabasis of Xenophon embody heroism but not the reflective rationality one finds in Sun Tzu.  So it makes an interesting gift.


Sonshi: The Art of War has spread from its native origin to Japan, Europe, and America. Why do you think its principles have such wide appeal?

Barrett: There is plenty of practical information in Sun Tzu, but basically he asks you to out-think your opponent.  That is a lesson that tends to be overlooked where heroism is celebrated, but it is a lesson of obvious importance across the world.


Sonshi: Speaking of Japan, you have mentioned in a recent talk that you liked Japanese film director Akira Kurosawa's "Kagemusha." Sonshi.com's logo was based on that movie's first scene. Do you think Takeda Shingen could have overcome his enemies' use of firearms through Sun Tzu's strategy if he were alive for the last scene?

Barrett: Takeda Shingen based his success on his use of cavalry, which is an element that is actually entirely missing in the Sun Tzu, since it predates the introduction of large scale cavalry warfare in China.  So he seems to have already adapted Sun Tzu to the conditions of his own times, and given a bit more time it is possible that he would have adapted his use of Sun Tzu to warfare with firearms too.


Sonshi: Also in your recent talk, you recounted the story of Sun Tzu training the king of Wu's concubines. How does one reconcile such ruthlessness with wise and compassionate concepts found in the Art of War itself?

Barrett: Many people have puzzled over the ruthlessness of Sun Tzu as depicted in the story about his arrival in Wu, and suggested that it could be entirely fictional.  We know so little about Sun Tzu from other sources that it is impossible to tell.  The book says nothing directly that makes it impossible; needless bloodshed is not part of Sun Tzu's way of war, but the context of the story is not warfare but persuasion, about which there were many stories in Warring States China, not all of them true.

​
Sonshi: Sun Tzu said, "Foreknowledge cannot be elicited from ghosts and spirits; it cannot be inferred from comparison of previous events, or from the calculations of the heavens, but must be obtained from people who have knowledge of the enemy's situation." It would seem Sun Tzu wasn't much of a spiritual or religious person. What are your thoughts?

​[End of interview]
SONSHI ☯ WHERE SUN TZU LIVES ON
​"Winning battles such that the whole world cries, 'Excellent!' is not the highest excellence." Sun Tzu
© 2020 Sonshi.com. All rights reserved. The name SONSHI® and "four-leaf clover" logo are registered trademarks of the Sonshi Group 和平的力量. Powered by Cuong.