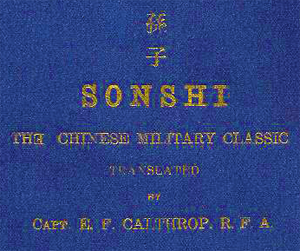 In feudal Japan, the fearless samurai referred to Sun Tzu as "Sonshi." Sun Tzu's philosophy was first introduced to Japan as early as 400 A.D. and was quickly embraced by the nation's intelligentsia. Brilliant leaders such as Minamoto Yoshitsune and Takeda Shingen made The Art of War their book of choice and were fervent practitioners of its concepts.

For example, Minamoto Yoshitsune knew early on that Sun Tzu's principles can help him achieve his life's mission:
Takeda Shingen, a Zen monk and stern military strategist, was such an enthusiast of Sun Tzu that he emblazoned The Art of War's words on his battle standard, Furinkazan:
Likewise, the word Sonshi represents well modern Art of War readers of any nationality because although some are not Chinese, they nonetheless admire the wisdom of Sun Tzu and are passionate about learning and applying his masterpiece. This venerable classic now belongs to the world -- to all of us here, fellow students and fans.

Speaking of fans, Takeda Shingen's admiration for Sun Tzu impressed us so much that we based the Sonshi logo on the Takeda four-diamond crest, or hishi mon -- similar to an argyle pattern -- but stylized to the emperor of Japan's imperial seal, a chrysanthemum emblem. Shingen's lofty ambition was only matched by his mastery of strategy, thanks to Sun Tzu's Art of War.

This diamond-flower combination design is on full display in the very first scene of the movie Kagemusha -- a story about Takeda Shingen -- written and directed by Akira Kurosawa, one of the greatest directors of all time. An admirer of Sun Tzu, Kurosawa included several lines of film dialogue that originated from The Art of War. For example, here is a scene where young child actor Kota Yui playing as Takemaru recites The Art of War's fu rin ka zan​ passage: 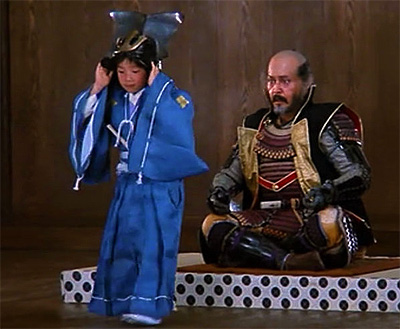 Young child Takemaru in Kurosawa's film "Kagemusha"
Takemaru: Why are you called a mountain, grandfather?
​
Kagemusha: [Unaware of the legend behind Shingen's nickname] "Mountain"?

Takemaru: Everybody calls you that. Where is the mountain? Is it because we have this mountain in our garden?

Sohachiro Tsuchiya: [Quickly intervening to cover for Kagemusha's ignorance] You know the master's banner. What do the letters mean?

Takemaru: [Reciting the slogan on the Takeda clan's banner] Swift as the wind ... Quiet as a forest ... Fierce as fire ... Immovable as a mountain.

Sohachiro Tsuchiya: The lord is that mountain. Both in battle and at home, he is steadfast, like a mountain. When his army advances, first the horsemen attack, swift as the wind. Second, the lancers raise a forest of spears, advancing with silent resolve. Third, more horsemen engulf the enemy ranks, as mercilessly as fire. And the lord is always behind them, watching over them, immovable as a mountain. That is why our army, from general to foot soldier, can fight so resolutely ... Immovable as a mountain. The lord is that mountain. So we call him "the mountain."

​Yes, we understand as well, Kagemusha. Shingen was the consummate leader, pure and simple, and his leadership was inspired by Sun Tzu's Art of War. (A little trivia about Akira Kurosawa: according to filmmaker George Lucas, the movie Star Wars was heavily based on Kurosawa's film The Hidden Fortress.)

The trademarked Sonshi logo's color green symbolizes life and tranquility, attributes describing peace on earth. For the uninitiated, this sounds contradictory for a book on war but in truth it is very much in line with the highest skill and accomplishment promoted in Sun Tzu's Art of War.

It does not hurt that the Sonshi logo also looks like a four-leaf clover, a talisman for good luck in Western culture. Of course you rather be good than lucky, but if you're good because you have employed the strategies in Sun Tzu's Art of War, you can't help but become luckier, too.

We are currently acquiring a very special emoji domain name, ☯.com. The yin-yang symbol ☯ represents well the balance of power and benevolence so brilliantly illustrated by Sun Tzu.

In 2017, we acquired ☮.com. The peace symbol ☮ represents well our increased focus on a matter of immeasurable importance: sustainable peace.

Also in 2017, Sonshi.com acquired ♀️.com. The female symbol ♀️ aligns with our continued effort to promote Sun Tzu's Art of War to women readers. Sun Tzu's wisdom is just as important to women as it is to men, if not more so.

​☯.com, ☮.com, and ♀️.com are among the rarest domain names in the world. There are only 29 known emoji dot coms in existence.
SONSHI - THE ORIGINAL SUN TZU'S ART OF WAR RESOURCE
​"Winning battles such that the whole world cries, 'Excellent!' is not the highest excellence." Sun Tzu
Privacy Policy
© 1999-2022 Sonshi.com. All rights reserved. The name SONSHI® and "four-leaf clover" logo are registered, incontestable trademarks of the Sonshi Group 和平的力量.