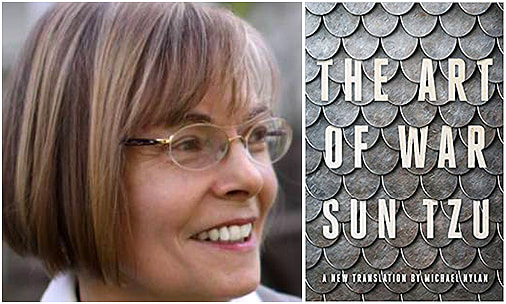 As we approach Sonshi.com's 20th anniversary on August 12, 2019, there is no better way to celebrate than to highlight a brand new Art of War translation by a woman scholar of the highest order, Michael Nylan.

​Dr. Nylan is Professor of History at the University of California, Berkeley. She earned her PhD from Princeton University in East Asian Studies. The China Story Journal aptly describes her as one of the foremost historians today working on early China and one of the world’s leading scholars of pre-modern China. Her interests span aesthetic theories and material culture, intellectual history and religious beliefs, with an emphasis on the sociopolitical context.

​Her published books, in addition to numerous major articles and essays, include The Five "Confucian" Classics, China’s Early Empires, Analects: A Norton Critical Edition, The Canon of Supreme Mystery, Exemplary Figures, and most recently, The Chinese Pleasure Book.

Michael Nylan is a translator who cares about the use and history of each and every word, in both Chinese and in English. Her upcoming book, The Art of War: A New Translation (published by W. W. Norton), will be the third complete translation of a classic and two more are on the way: the Documents Classic -- now close to a final polish -- and very much down the road, she will finish her draft of Wang Chong's Discourses Weighed in the Balance (Lun heng).

Dr. Nylan exemplifies well Sonshi's commitment to promoting more women to not only read Sun Tzu's Art of War but also lead the way in its discussions, scholarship, and application now and in the future.

Below is our interview with Michael Nylan. Enjoy!
​
Sonshi: Do you remember the first time you learned about Sun Tzu's Art of War? Please tell us about it.

Nylan: I read part of Art of War while learning classical Chinese, in the mid-1970s.  As I was part of the anti-Vietnam War generation, I didn't imagine I would be looking at it again. I just read it, because it, along with the Mencius and the Han Feizi, was relatively easy to read (I thought).  Little did I know...

​
Sonshi: Your new translation of Sun Tzu's Art of War (published by W. W. Norton) will be available on January 7, 2020. We like how it's being presented: "For the first time in any modern language, a female scholar and translator reimagines The Art of War." We are intrigued! Given it is a woman scholar's work makes your edition a must-read for any Art of War student. What made you decide to translate Sun Tzu's Art of War?

Nylan: I took on the work of translating as a way of teaching a group of graduate students, all of whom were interested in the Art of War, for different reasons. One of those students had served two tours in combat, for example, before coming to Berkeley; a second was researching the history of the ethnic groups of Wu and Yue, supposedly at the time when the Sunzi was compiled; and a third was specializing in Cao Cao's writing. As it turned out, I probably learned more than any of my students, since they taught me a lot.

​What I bring to the book that earlier translators did not bring was a depth of historical knowledge of the period (perhaps Giles, a pioneer, was the exception here), plus an interest in how this classic fits into a larger scheme of classical learning during the early empires in China.  That said, the translation group, myself included, founded particularly helpful the translation by Roger Ames of an excavated version of The Art of War.

I don't see the text as a military classic, in other words, but as a classic, plain and simple, just as no one would, I think, characterize Thucydides as a "military classic."  The psychological depth of the piece, rather than the kill-ratio, intrigued me, in other words; that plus the talk of financing wars, as I am deeply interested in antique views of money and wealth.


Sonshi: Without spoilers, can you share with us one perspective or discovery that is new, unexpected, or provocative about your Art of War book?

Nylan: There were so many discoveries that it would be hard to specify one.  The classical Chinese text uses such plain language to convey such sophisticated ideas.  That is always a delight for the translator, as well as a real difficulty.


Sonshi: For the last decade, we at Sonshi.com have been promoting Sun Tzu's Art of War as a text for women. We even purchased the domain name, ♀️.com! How can women use The Art of War for their benefit?

Nylan: We know very little about the reading habits of women in the early empires and only a bit more about the men.  That said, when one considers the wide range of uses to which the Art of War was put during the early empires (with relevance for sexual pleasure, career competitions, and medical applications), I think it very likely that women read this text, as well as men.

​I am one of the people who has argued, with good evidence I believe, that high-ranking women in the early empires (Han through Tang) were trained to read and compose a variety of texts, not just the women's classics known from late imperial China.  Conversely, the Traditions about Exemplary Women (Lienü zhuan) we know was written for men at court.  After working with the text for three years, many of the lines have stuck with me.  As most people in the early empires learned texts through oral transmission, as much as through written, I can now somewhat understand what it would have felt like for such readers/reciters.


Sonshi: From traditional accounts, Sun Tzu was a contemporary of Confucius, a subject of at least two of your books, The Five "Confucian" Classics and Lives of Confucius. What are the similarities of the two philosophers?

Nylan: There is one striking similarity between the Art of War and the Analects ascribed to Confucius, and the same lesson runs throughout all the masterworks of early China: "Know what is enough."  If we, in today's world, could learn that lesson, we would be taking the appropriate steps to waste fewer resources and conserve the environment.  "Know what is enough" says a great deal about needless ambitions, needless to say; we can all learn to be less destructive toward our communities.

​A second (and parallel) observation: neither the Art of War nor the Analects relishes war-mongering, as they both imagine a different kind of glory can be gained by those who seek to work by other means.


Sonshi: Where do you think Sun Tzu shine in The Art of War? Where did he fall short?

Nylan: As a historian, I think of all early texts as probable composite texts.  That said, I definitely have parts of the book that intrigue me more than others. Reading the commentaries to the text has alerted me to the fact, however, that some of the parts I thought rather dull or abstruse (for example, talk of the odd and even) may have great philosophical depth. I just needed to learn more to begin to see it.

​
Sonshi: Joseph Levenson, an outstanding professor of Chinese history, talked about the amateur ideal. What is your advice to a student of Sun Tzu's Art of War in the modern world as it relates to the amateur ideal?

Nylan: Joseph Levenson was my teacher for one semester (the last he taught). My life has been guided by the notion of the "amateur ideal," that a truly cultivated person has to relate disparate parts of existence to one another, and read, read, read everything, as everything is related, for the smart people I translate.  We are in the mess we are in, in large part, because too people in power think it's idiotic or inefficient to develop such capacious views.  I prefer the old Chinese way: the relational, which is the basis of all their early pleasure theories.  I was working on those (and also the destructive emotions) at the same time I was reading the Art of War.


​[End of interview]
SONSHI - THE ORIGINAL SUN TZU'S ART OF WAR RESOURCE
​"Winning battles such that the whole world cries, 'Excellent!' is not the highest excellence." Sun Tzu
Privacy Policy
© 1999-2022 Sonshi.com. All rights reserved. The name SONSHI® and "four-leaf clover" logo are registered, incontestable trademarks of the Sonshi Group 和平的力量.