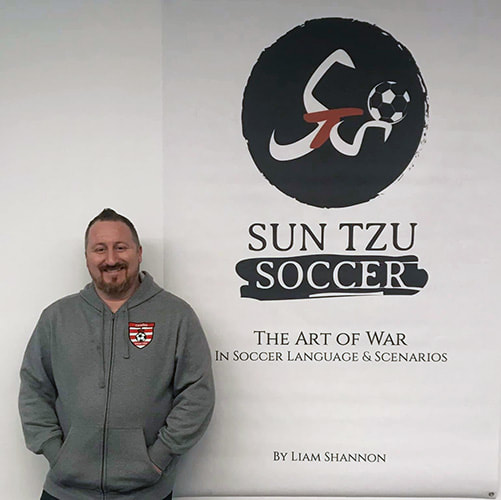 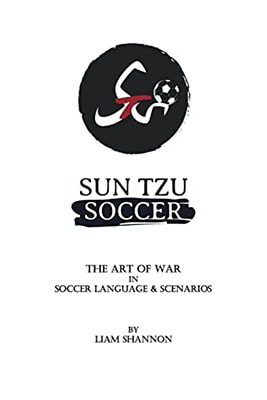 As many fans as that may seem, the most popular sport in the world isn't American football but a football of a different sort -- association football -- otherwise known as soccer. The sport has 3.5 billion fans! Yes, billion.

But how does the sport of soccer relate to Sun Tzu?

First, the game of kicking around a ball was first played in China as early as 300 BC. It was called Cuju. The modern sport of soccer, however, was created by England.

Second, back in 2002, we at Sonshi first heard of how Sun Tzu’s Art of War helped Luiz Felipe Scolari’s Brazil team win the World Cup that year. Also, Gen. Charles Krulak, a Sun Tzu student, was involved with the Aston Villa Football Club not too long ago.

Therefore, it was no surprise to us when we found someone from Southampton, England, Liam Shannon, who had written an Art of War version applicable to soccer titled, "Sun Tzu Soccer: The Art of War in Soccer Language & Scenarios."

Mr. Shannon is the Executive Director of Carolina Soccer Club (CSC) in Concord, North Carolina, USA. He has coached at the Charlotte Soccer Academy (CSA), FC Carolina Alliance, and Pfeiffer University. He was a soccer player for Berry College in Rome, Georgia, USA, on a full scholarship.

Because of soccer's popularity all around the world, it's important to understand how Sun Tzu is positively influencing the sport. It is yet another way Sun Tzu's universal principles are being applied to an activity involving intense competition, an aspect that Mr. Shannon knows all too well.

Below is the interview with Liam Shannon. Enjoy!
Sonshi: Would you share with us your background on soccer? When did your passion for soccer start? What helped you to continue?

Shannon: I currently run Carolina Soccer Club which is a youth soccer organization just outside of Charlotte, North Carolina in the United States. I have coached in club soccer, college, high school and/or middle school for the past 21 years. I have gained the United States Soccer Federation (USSF) “C” License and the USSF National Youth License. I have also gained the United Soccer Coaches (USC) Premier Diploma and the USC Advanced National Goalkeeping Diploma.

I have been kicking a ball for as long as I remember. One of my earliest memories in school is having to play with a stone because the older kids stole our ball. I also remember stopping games I was playing with my friends and telling them where they should move to and what passes they should be choosing – I was 6.

Primarily, what helped me continue with soccer throughout my life is based on what I just mentioned: I always remember it being a part of me. Part of my earliest memories – not just playing but “coaching”. Soccer also opened doors for me. I got my degree because of a soccer scholarship. Not only that, but soccer always opens social doors: you make friends and form groups of friends through playing and coaching.


Sonshi: Now would you share with us your background applying strategy to soccer, and why particularly Sun Tzu's principles?

Shannon: I was a double-major in college: government and history. I can’t remember what specific class The Art of War was assigned in; it could have been almost any! Either way I was assigned the book. I kept the book after college because I knew I would read it again at some point, I just didn’t know when or envisage it would have a specific purpose. However, when I found myself coaching in 2011 something made me pick it up and take another read. It was a real light blub-over-the-head moment. The principles screamed at me from the pages. All I could think was “how has no one ever done this before?” It was so clear how it could all be applied.


Sonshi: Can you give us an example how a soccer coach or player applied Sun Tzu's Art of War in an actual game?

Shannon: I can give you lots. If someone was particularly interested, then they should check out the “News” section of my website where I publish videos of how coaches have applied the principles. In addition, on my Twitter account I regularly comment on Premier League games where the principles have been applied. Without doubt the most famous and most significant example of a coach using the theories, however, was Brazil coach Luiz Felipe Scolari. He’s a big fan of Sun Tzu and during the 2002 World Cup he would put passages from the book under his player’s doors at night. Brazil won the tournament.


Sonshi: If Sun Tzu’s Art of War can be applied to soccer, we can probably presume the book can also be applied to other sports. Do you agree?

Shannon: I certainly do agree, and that is why I established “Sun Tzu Sports”. I firmly believe this concept can and will be applied to a variety of sports.


Sonshi: What has been the reaction from your players when you teach them war principles to a sport? Or do you naturally coach them those principles without labeling them as being from Sun Tzu?

Shannon: The second one. There’s a fine line between educating players and not distracting them!


Sonshi: Historically, China invented the game of soccer, but England invented the modern version of soccer (association football). How interesting we have an English writer going full circle connecting soccer with a Chinese classic. If more people learn from you and have success, do you think the game of soccer will change in the future? What would change?

Shannon: The game is already changing with much more intellectual coaches like Pep Guardiola, Jose Mourinho, Xavi, Jurgen Klopp, Hansi Flic, Julian Naglesmann, and Thomas Tuchel. These guys are all at the absolute top of the game, and it’s not just because they’re “good at soccer”. Their understanding in general terms of strategy, systems, tactics and the interactions of all three, in their own team and in the opposition, is extraordinary. They all know Sun Tzu, even if they don’t know they do. These are very clever men.

What I do hope will change in the future though is a wider recognition for Sun Tzu and The Art of War, not just from coaches but players and fans too. It is incredible that world class coaches are applying his theories to a sport 2400 years after his death. I think that deserves appreciation.


Sonshi: What is upcoming for Liam Shannon?

Shannon: Aside from continuing to produce my own content analyzing modern day coaches and games through the lens of Sun Tzu, the most exciting thing I am working on is a collaboration with the United States Soccer Federation to implement Sun Tzu Soccer into their coaching curriculums. I figure that if The Art of War is taught at West Point, Sun Tzu Soccer is worth studying for coaching licenses! Hopefully that will come to fruition soon.

You can learn more about Liam Shannon at his website, www.LiamJShannon.com
SONSHI - THE ORIGINAL SUN TZU'S ART OF WAR RESOURCE
​"Winning battles such that the whole world cries, 'Excellent!' is not the highest excellence." Sun Tzu
Privacy Policy
© 1999-2022 Sonshi.com. All rights reserved. The name SONSHI® and "four-leaf clover" logo are registered, incontestable trademarks of the Sonshi Group 和平的力量.